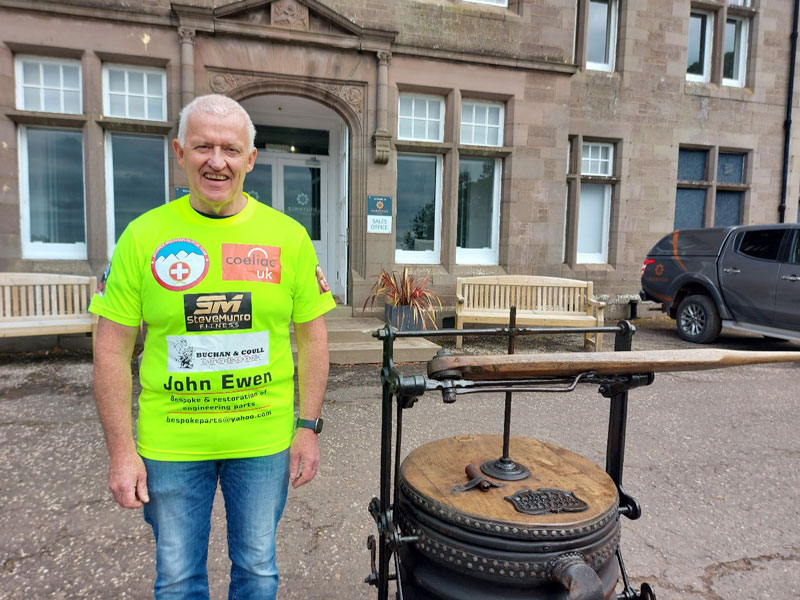 John Ewen, a local Hillside lad has brilliantly restored one of Sunnyside’s historic treasures, the blacksmith’s bellows, which were found in the one of the old workshop buildings.

John’s father, also John (Jock) worked at Sunnyside in the Boiler House until his passing in 1987. When John saw we were starting to take the old chimney down he got in contact with us, and asked if he could get a small piece of the steel from the chimney – to make a small plaque in remembrance of his late Father. John met with Mark MacPherson on site – at which point the Boiler House was reduced to a pile of rubble – many fond memories started flooding back to him, times when he used to go up and see his Father at work, sometimes getting to blow the steam horn off! John and his wife, Moira – who also worked at the Hospital in the sewing room – enjoyed many walks around the beautiful grounds in its heyday. After getting the section of steel from Mark, we found out that John’s hobby is restoring vintage engine parts in his workshop, and making bespoke parts. At that point Mark told John about the bellows salvaged from the old workshop, and John very generously offered to take them away and restore them to their former glory. When John returned with the bellows, we could hardly believe these were the same ones he took with him – he has made a superb job of restoring them!

The bellows will be kept as an ornament, a nod to Sunnyside’s past, where it will eventually be displayed in the proposed Sunnyside Community Hub, located in the Main Building upon completion.

John is also doing the virtual 2021 Virgin Money London Marathon for numerous charities such as, Blood Bikes Scotland, Alzheimer Scotland, Keswick Mountain Rescue Team, Coeliac UK, and Cancer Research UK, considering the struggle of living during the Covid-19 pandemic. We are honoured to sponsor John in this to thank him for renovating the bellows and for engaging with the Sunnyside Estate project.

If you would like to support John for these worthy causes, please check out his fundraising page for more information: https://uk.virginmoneygiving.com/fundraiser-display/showROFundraiserPage?userUrl=19966_8916785_1363&pageUrl=1&fbclid=IwAR2zcBOdF2y59StCFd3y_DcwadmD68T1zgHSt2NHd1Ga1j_lbEQAyEsXhVI

Sunnyside Estate is a unique opportunity to live within the exceptional mature estate grounds of the former Sunnyside Royal Hospital, offering semi-rural living but still within easy reach of transport links and the amenities of nearby Montrose.

To learn more about these superb properties for sale, the high quality contemporary finishes and the whole development concept please contact Jaclyn McKenna our sales manager on:
01674 668 326 or 07498 872 299
jaclyn.mckenna@sunnysideestate.co.uk